Shot in the darkly chic Coppelia cocktail bar, the camera follows the kinky couple, portrayed by the irresistible Natalia Paris and Paco Roca, who don’t realize that a curious voyeur is following their every exhibitionist movement … or do they? An inspiring performance that will leave you wondering how you can play your very own sex game, and whether you’ve ever missed one going on around you! Handcuffs premiered in 2009 at Circuito Off in Venice, Italy. 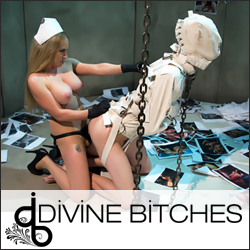